Art at the Intersection of Culture and Spirituality

Home/Accessibility/Art at the Intersection of Culture and Spirituality

Art at the Intersection of Culture and Spirituality

In the same way that western music has its roots in religious tradition, the interconnectedness between religion and art has been symbiotic; both evolving codependently to reflect social, cultural, and technological changes over time. Though the study of religion is mostly accomplished through text, the aesthetic qualities of religious artwork have remained integral as a connection between the soul and the interpretation of these texts. Classical examples of this can be seen in the artwork of Da Vinci, Michelangelo and Raphael and modern artists such as the sculptor Tanavoli and the street artist El Seed are once again turning to spirituality as a source of inspiration for their work. This global movement has seen echoes here in Buffalo with artists and arts organizations focusing their work around spiritual themes and messages.

Buffalo is a city that has a longstanding tradition of welcoming immigrants from across the globe and the artists and religious or spiritual artwork that can be found here are representative of these diverse cultures. One artist that has been making a name for himself in the local and global scene is Muhammad Zaman who specializes in Arabic calligraphy. He is a studio artist at the Buffalo Arts Studio and his work can be seen as murals and at exhibitions throughout the city. Another incredible hub of religious artwork that represents different cultures can be found at the Buffalo Religious Arts Center in Buffalo’s Black Rock neighborhood. Founder Mary Holland has made it her life’s work to preserve religious art from sculptures to stained glass that were destined to either be sold or lost when a number of churches and other houses of worship closed their doors back in the early 2000’s. The works that she has curated are done largely by artists who had immigrated to the United States and their work reflects their culture alongside traditional religious iconography.

Visual artist Muhammad Zaman came to the United States when he was eleven years old. A shy kid, he used his paper and pen to escape and write within his old worlds. At this point in time, he was going to an Islamic school and learned the Arabic language alongside English and Bengali, which is the language of his fatherland. Growing up on the East Side, he would often look upon the train cars and the colorful graffiti, which provided a sharp relief from the grey that surrounded the area. Although he’s never done illegal graffiti, the idea of this popular form of street art took hold and he eventually learned to incorporate Islamic calligraphy into his art. Since then, he has incorporated all three of the languages that make up his identity into his artwork.

Early on in his career, Muhammad was inspired by the work of Hassan Massoudy, an Iraqi painter and calligrapher who is attributed to the inspiration of an entire generation of “calligraffiti” artists. In fact, it was Massoudy who inspired Muhammad’s other influence, Tunisian artist el Seed, another calligraffiti artist, to begin his work. Said Muhammad of el Seed, “I was influenced by the artist el Seed and his idea to create unity for people from different backgrounds, ethnicity, and religion. He inspired me at a conceptual level, not only aesthetically. I was astonished by his mural work Perception, painted in Cairo in 2016. It is still my favorite mural of all time.”

This mural (see photo), located in Manshiyat Nasr in Cairo, is an incredible sight to behold. It is a circle of interwoven calligraphy painted across over 50 buildings and is only wholly visible from a single vantage point, Muqattam Mountain, where the St. Simon Monastery lies inside a cave. The text in Arabic reads, ‘إن أراد أحد أن یبصر نور الشمس، فإن علیھ أن یمسح عینیھ’ (“Anyone who wants to see the sunlight clearly needs to wipe his eye first.”) The mural was a testament to the power of the arts to bring a community together and a message of hope and peace to all of its residents.

Similarly, Muhammad aims to inspire people in the same way with his work. He remarks, “My aim is to inspire people to share the same place and learn from each other in harmony and mutual understanding. I want people from different cultures and different religions to be able to do that and to raise their children in this way. I never talk about my religion in my paintings, I talk about those values most of the religions have in common, such as respect, peace, and mutual help.”

Mr. Zaman’s artworks are complex and leave a different impression on every individual audience member. “The mix of languages that I use and the further artistic elaboration of the composition involving the juxtaposition of different layers of color and words will make the work illegible,” said the artist of his work. “The more the audience finds it difficult to read the words contained, the more they will try to understand their meaning, and this interaction between the work and the audience is what most amazes me. But there are many people that enjoy my art like abstract art, and I’m fine with it. I love that it’s like a private dialog between the painting and each one of the audience.” 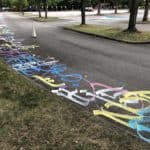 Muhammad’s works are instantly recognizable and luckily for Western New York, there are a good number of them anywhere you look. In fact, he was the summer artist-in-residence at Artpark in Lewiston where he completed the mural “Unity In Diversity” (see photo) whose vibrant colors stretch along the South 4th Street entrance to the park. His work can also be found for sale online and at his studio at the Buffalo Art Studio in the Tri Main Center. In 2022, he has two murals scheduled to be completed and one will be at the Burchfield Penney Art Center. He will also be featured at a show at Book Arts in the literary district of downtown Buffalo.

For more information about Muhammad Zaman’s work, you can visit his website: zmnart.com.

In 2008, the Catholic Diocese of Buffalo announced the closing of over 70 churches, bringing the number from 275 to to 198, through a strategic plan known as the “Journey of Faith and Grace,” according to a WIVB article. This was a tumultuous time with many church-goers displaced and disheartened by the loss of their lifelong parishes.

As churches were forced to close their doors, Buffalo-born retired architect Mary Holland had a different question on her mind: “What is going to happen to all of the artwork and relics housed in these churches?” Mary’s experience as an Engineer Research Librarian made her swiftly adept at recognizing this important and unique opportunity and she and a few volunteers quickly mobilized to begin rescuing art from as many sources as possible and this is how the Buffalo Religious Art Center began. 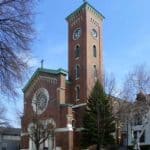 The next priority for Mary was to repurpose one of the architecturally significant churches that was slated for closure to house all of these pieces. She found the perfect location at the former St. Francis Xavier Church at 157 East Street in the Black Rock District in Buffalo. The church, constructed between 1911 and 1912 by the Buffalo architect Max G. Beierl, features a unique set of Munich style stained glass windows depicting the Stations of the Cross and made by F.X. Zettler.

Another gem in the stained glass collection of the center is by Otto F. Andrle whose stained glass work is featured at the Our Lady of Victory Basilica in South Buffalo. The Andrle work that the Center owns is not made of stained glass but is a cartoon, a picture drawn in black and white that is used to guide the eventual glass laying. According to Mary, “They are very hard to find because they were always thrown away because they were just a drawing. We are very lucky to have Andrle’s from St. Gerard’s church [formerly on East Delavan Street in Buffalo] even though the windows themselves went to Atlanta, Georgia so there’s none of them left.” The Art Center has stained glass including works by F. X. Zettler, Frohe, Anderle, Nincheri and Pike Studios dating from 1908 to the 1920’s.

Much like these stained glass windows, the artwork featured in the Buffalo Religious Art Center features the work of immigrants to the United States and that is one of the main themes running throughout the gallery. The works themselves stretch across many mediums including original architectural drawings, statues, oil paintings, and murals and each are a treasure to behold for both their artistic value and unique story. 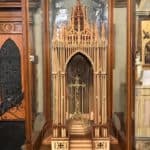 One of Mary’s favorite pieces was actually found in a total surprise. A phone call came to her from a man who had a wood carving that he wanted to show her which turned out to be an intricately designed baldachin made of Balsa wood from 1896. The work (see photo) is constructed from hundreds of pieces of wood that have been constructed into this beautiful canopy.

Although much of what the Buffalo Religious Art Center owns are from Catholic churches, they accept items from any denomination. They have a number of Judaic pieces from when Temple Beth El merged with Temple Shaarey Zedek to form Temple Beth Tzedek in 2008.

If you would like to visit the Buffalo Religious Art Center, the best way would be to book a tour which can be done by calling (716) 481-2350, visiting www.buffaloreligiousarts.org or their Facebook page. There is ample parking available in the school parking lot and an accessible entrance in the rear of the lot.