The Importance of Creating Spaces for Indigenous Artists

The Importance of Creating Spaces for Indigenous Artists

We would like to take a moment to acknowledge the traditional territory of the Haudenosaunee and honor the sovereignty of the Six Nations – Seneca, Tuscarora, Cayuga, Oneida, Onondaga, and Mohawk – and their land on which we are situated and doing our work today.

We want to demonstrate respect for the treaties that were made on these territories, and express our remorse for the harms and mistakes of the past. We acknowledge that we were founded upon the exclusions, displacement, and erasures of the Indigenous peoples who resided here when we arrived and who still reside on these lands.

We encourage everyone to join ASI as we take the time to learn more about our collective history and connect with Indigenous communities. We respect our nation-to-nation relationships and the responsibilities we have to one another. While we know a land acknowledgement is not enough, it is an important social justice and decolonial practice that promotes indigenous visibility, and is a reminder that we are on settled indigenous land. It is incumbent upon us, those currently residing on this stolen land, to take action and begin the difficult conversations with our Indigenous neighbors that need to take place with a spirit of respect, reconciliation, and collaboration.

Dave Kimelberg, enrolled member of the Seneca Nation (Bear clan), is bringing the work of world-class Indigenous contemporary artists to his gallery, K Art, located on Main Street in Buffalo. Since K Art opened in December 2020, they have hosted three exhibitions and shown the work of 16 Native artists from the United States and Canada. Their current show, “Ga’nigöi’yoh” is a retrospective of the work of G. Peter Jemison (Seneca Nation, Heron clan) and is on display until the second week of January. 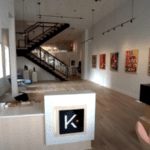 In terms of commercial art spaces, K Art stands alone in that it is one of the only Native-owned galleries featuring the work of contemporary Indigenous artists. Kimelberg began as a collector of contemporary Indigenous artwork but recalls, “It’s hard to find. In the big auction houses, there aren’t a lot of galleries that are focused on it, particularly none that are Native owned.” Recognizing the need for these artists and their stories to have their own robust platform and marketplace, he created K Art as the vehicle by which to bring these voices to a local and global audience.

Since opening in December just under a year ago, public reception of the gallery and artists has been remarkable. K Art has been attracting worldwide attention from buyers, affirming Kimelberg’s belief that there is substantial market demand for contemporary Native art. They have even begun to garner worldwide prestige, having been one of the first Native-owned galleries invited to the Toronto Art Fair.

“When people think of Native American (art), they always look back. They think of the Western tribes with the feathered headdresses but there are 574 recognized Tribes in the U.S. alone. It’s super diverse and the art really reflects that. And, even within all of those unique groups, each artist really has their own voice,” said Kimelberg.

One such unique artist is Peter Jemison, whose show is currently up at K Art. Titled “Ga’nigöi’yoh,” the show is a six decade long retrospective of Jemison’s work where the viewer can see for themselves the evolution of his paintings and examples of his striking use of paper bags, which he is well known for. Jemison’s work has been a hit with art buyers and they have even been picked up by major institutions. In fact, some of his work was selected for this year’s “Greater New York” exhibition at MoMA PS1 which will be on display until April 18, 2022.

Kimelberg specifically cites three pieces: “Road Mother,” “Maple Shadows,” and “Summer Strike” that visitors to K Art will want to be on the lookout for. These pieces represent Jemison’s work from the early 2000’s when he would make the paper himself, from pulp. “There’s watercolor, mixed media, there’s embossing… Those three works are really remarkable,” said Kimelberg.

Always looking for the next big thing, K Art has even begun to venture into the realm of NFT’s with a special collection by Edgar Heap of Birds (Cheyenne and Arapaho). Heap of Birds will also receive his own solo show which will open at K Art in mid-January.

For anyone looking to visit K Art, the best way to do so is by booking a 30 minute self guided tour through their website. Personal tours are also available by emailing “[email protected]”. The gallery is located at 808 Main Street in Buffalo.

This past Saturday and Sunday (November 20 & 21), the Niagara Arts and Cultural Center or the NACC presented their “Native Voices” cultural celebration which featured dozens of Native artisans. There were visual artists, textile artisans, musicians and dancers from across the region who did a spectacular job telling their stories and bringing awareness to a number of very topical issues that aren’t being talked about in the mainstream media.

The most potent example of how the art can be used to comment on pressing social justice matters was during the regalia and fashion show that took place on Saturday in the NACC theater. The show was hosted by Tina Mt Pleasant (Tuscarora Nation, Turtle clan) who emceed the show as well as made two of the outfits modeled. The first half of the event was a traditional fashion show where the models walked the stage showing off traditional Native outfits and accessories but the second act is where the show transformed into something else completely; a moving statement to raise awareness about the Murdered and Missing Indigenous Women humanitarian crisis.

In the recent months, many have heard about the horrors surrounding the recent discovery of more than 1,300 unmarked graves of Indigenous children in western Canada. While this may seem like an incident of the far-flung past, similar violence is happening here and now both in the United States and Canada, specifically against Indigenous women and girls. The Murdered and Missing Indigenous Women movement or MMIW was created as a call to stop the violence against Indigenous women and girls who face crime rates at least ten times higher compared to women in other groups.

The second half of the fashion show was titled “Not Forgotten” and featured designs that both honored the women and girls who have been lost as well as to spread awareness about the issue to those who may not be familiar. 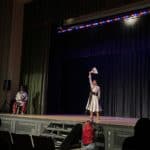 One very striking model walked the runway with a vibrant red hand painted across her mouth, which has become the symbol of the MMIW movement. The red handprint across the mouth stands for all of the missing sisters whose voices are not heard and the silence of the media and elected officials in regards to the ongoing epidemic. As the model neared the edge of the stage, she raised her fan in the air as if to say: “No more stolen sisters.” (See photo)

Another memorable outfit was worn by Mackenzie Smith (Tuscarora Nation, Turtle clan). Her mother, Kehala Smith, created a skirt that was made in honor of the missing and murdered Indigenous women. Sister Ariana Smith also modeled a skirt made by her mother in honor of MMIW.

It is not to be understated here that these designs that went down the runway are incredible works of art. Even though the show discussed subject matter that is grim and bleak, the strength of the models and the love and care that went into creating their outfits was palpable to the large audience in attendance. Many designs were created by family members or passed down through generations They featured intricate beadwork designs and many of the skirts and dresses were adorned with delicate ribbons.

The show closed with Tina Mt Pleasant citing a number of ways that the audience could spread awareness surrounding the MMIW movement. She included using social media with the tag #MMIW and donating to organizations that pursue justice for these individuals and their relatives. More information regarding the crisis and resources can be found at “nativehope.org” “uihi.org” and “indianlaw.org” for the Indian Law Resource Center.

Please consider learning more about MMIW and what you can do to help. Thank you to Tina Mt Pleasant and the Niagara Arts and Cultural Center for the work that went into creating this festival and show and for sharing this message. The “Native Voices” art show is on display until November 28th.