Spotlight On Inclusivity in the Arts

Home/Accessibility/Spotlight On Inclusivity in the Arts

Spotlight On Inclusivity in the Arts

For this month’s spotlight, I had the opportunity to visit two organizations whose focus is inclusivity in the arts to speak with the artists about their projects. The talented artists at Starlight Studio and Art Gallery and the dazzling cast, staff, and writers at Unique Theatre Company are both creating captivating works that you definitely won’t want to miss.

On Delaware Avenue, across from Babeville, there is an unmistakable building nestled between two commercial office buildings. You’ve probably passed by it any number of times; maybe been intrigued by its brightly colored mural facade and large, inviting glass doors and windows. Yes, that’s right, we’re talking about Starlight Studio and Art Gallery and their team of talented artists.

Founded in 2005, Starlight Studio is a “cooperative environment that supports adults with disabilities in their artistic development.” Most recently, the Starlight Artists participated in a collaborative project with Lara Buckley and the Hickory Urban Sanctuary on Pratt Street in Buffalo, where they were inspired by the natural surroundings and wildlife. The project entitled, “Magnified Observations: The Art of Wild” was a resounding success and resulted in three public events; two at the Hickory Urban Sanctuary and one at Starlight Studio and Art Gallery.

I got to experience the results of the collaboration first hand during the event hosted at the gallery on October 1st. The gallery space was transformed into a multimedia experience complete with a recreation of the sanctuary space through a tunnel-like fixture draped in plant material and papered with the participant’s colorful mural made through the duration of the program. Full length banners decorated by the Starlight artists adorned the windows giving the entire space a magical and secluded feel.

When I arrived at the gallery, I was promptly greeted by Andy Calderon, a Starlight artist and poet who was giving a reading of his poetry later that evening. We chatted while he walked with me to the side gallery where one of his paintings was on display, a watercolor aloe plant in a vibrant purple pot. 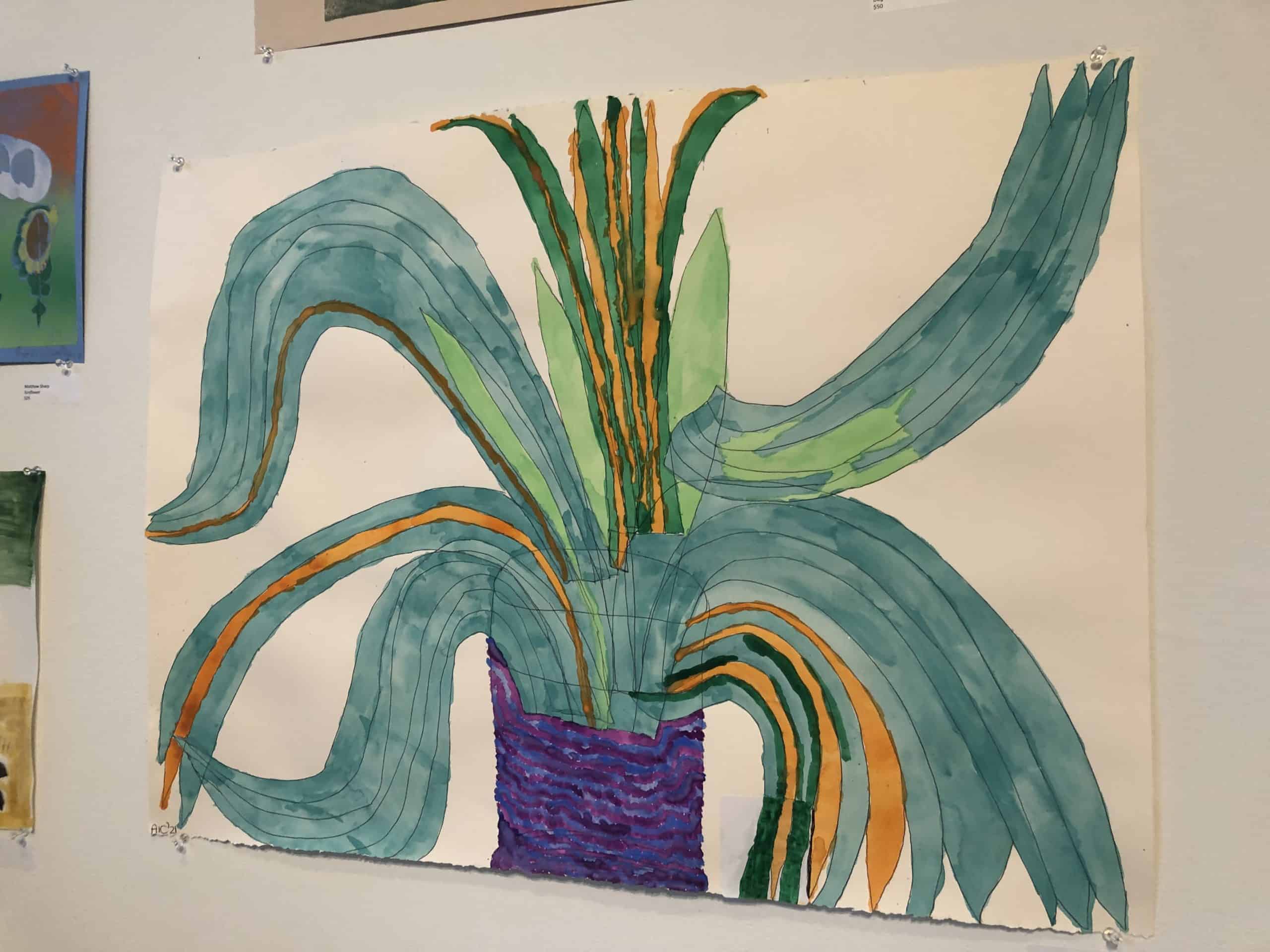 Calderon’s painting (see photo) was not only an ode to this dying plant that he nursed back to health, it was also an exercise in color and movement for the artist. You would never know from looking at his painting that the aloe plant when it was drawn was on the brink of death because the colors chosen by Calderon are exuberant and depict the plant for the life he saw inside of it. If you visit his gallery shop on the Starlight Studio website, you will see that much of his work features plants and animals as well as the tasteful use of repetitive motifs and vibrant colors.

His book of poetry is also for sale on Starlight’s online store. I can personally attest that Andy is a talented poet. He riffed a few lines from a phrase on a shirt that someone was wearing and his rhymes were slick and delivered with a joie de vivre that is guaranteed to put a smile on your face.

I also had the pleasure of talking to Starlight artist Janet Harrison who had a solo show exhibit on display that evening entitled, “Music Inspired.” She recounted her experience at the Hickory Sanctuary and specifically the chickens that they got to interact with at the space! Her show featured a large chalk mural adorned with the names of familiar bands and musical artists. There was also music by those bands being played to accompany the mural and Janet’s other artworks displayed throughout the Blue Sink Cafe area.

According to Starlight’s website, Janet is “enthusiastic about art and enjoys incorporating various designs into her drawings and paintings, including Celtic patterns, stained glass and fantasy illustration.” She has a very distinct style that incorporates portraiture and a flair for nostalgic colors and designs such as bicycles. My favorite work of hers is available for purchase on Starlight’s website and entitled “Trees of Mendocino.” This 9-foot long work features pinks, yellows, blues, and purples with a distinctly California vibe and a beautiful blend of textures and shapes through the use of both colored pencil and watercolor.

The next time that you’re driving down Delaware and spot that brightly colored building, I highly recommend stopping inside Starlight Studio and Art Gallery. The people there are warm and friendly and you can browse and purchase artwork that like the artists themselves, will be one-of-a-kind.

Just the other day, I had the opportunity to attend the first meeting of the new season for Unique Theatre Company led by Beth Geyer, Artistic Director, and Vienna Haak, Executive Producer. Their mission: providing a venue where persons of all levels of ability can learn and express themselves through art, playwriting, acting and more. Even though what I witnessed the other day was only the first meeting, I can say that there are big things in store for this group of talented directors, actors, and playwrights. 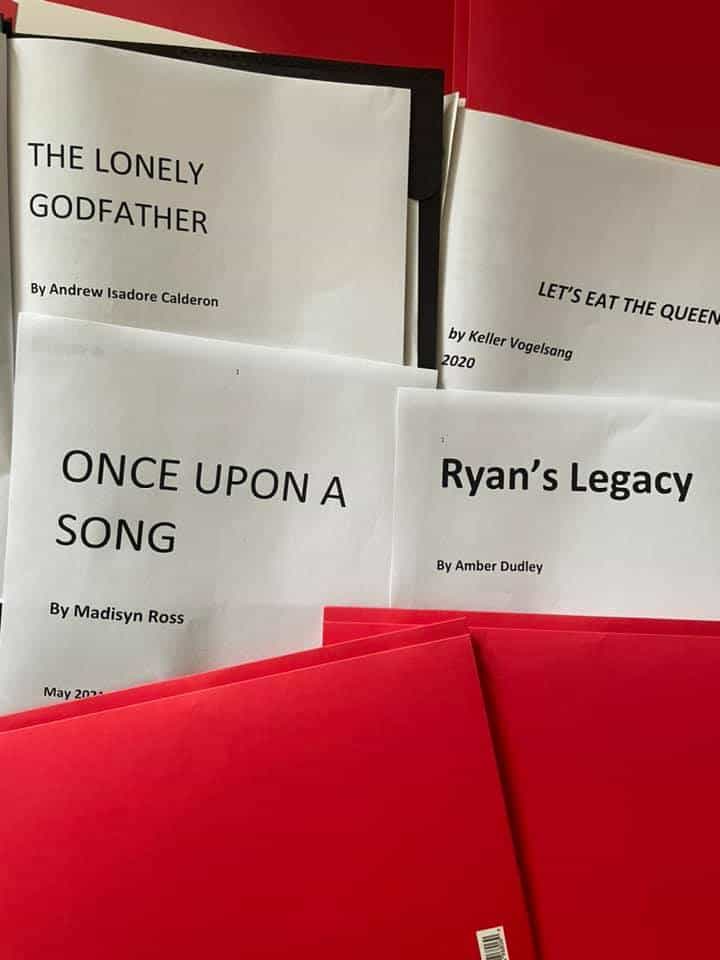 When I arrived at the space, everyone else was arriving too and there was an excitement in the air for the return to live theater after the pandemic. The company is working on their return to the stage; a show entitled “Slices of Life” featuring four short plays written by Unique Theatre’s own playwrights. The four plays entitled “The Lonely Godfather,” “Ryan’s Legacy,” “Once Upon A Song,” and “Let’s Eat the Queen” were written by Andy Calderon, Amber Dudley, Madisyn Ross, and Keller Vogelsang respectively.

I had the pleasure of talking with Keller about her show, “Let’s Eat the Queen,” which is her very first staged production. While this is the first show of hers that is being produced, when asked to submit a play during the pandemic, she actually wrote six plays before deciding to produce this one. “The play is about two sisters who enter a scary house on Halloween,” explained director Charlie. “They meet John the Vampire, who doesn’t want to be a vampire anymore, but cannot leave the house due to a curse put on it by Jude the Ghost. The only way for the sisters to free John the Vampire from the curse is by eating the Queen Vampire who rules all.” Keller said she is so excited to see her work come to life on the stage and it will definitely be a fun-filled (and maybe just a little bit spooky) ride for the audience.

I also got to chat with actor Ron who plays cousin Benji in Amber Dudley’s play, “Ryan’s Legacy.” Ron has been with Unique Theatre for a number of years now and is a seasoned professional who is looking forward to playing this role in Amber’s serious work. “Every year I get nervous but you know what, you go up there and you do your thing,” he told me. “I love these people, I love acting with my friends.” Ron and his acting buddy Jacob have been acting and having fun together for years and you won’t want to miss this dynamic duo together onstage.

Finally, I sat down with the actors and directors working together to bring Andy Calderon’s work, “The Lonely Godfather,” to life. Husband/wife directing team Jeff and Erin are already eager to work with Andy so they can do the best job of bringing his words to the stage. “The work is about Joe, a mafioso, and his long-suffering secretary Mary, and his conciliary named Tony who brings in Roxane, who is the daughter of a deceased mafioso,” Jeff explains. “Roxane wants to take on the legacy of her father but Joe doesn’t know about that… But on the other hand, Joe also wants a girlfriend and when Tony tells Joe that Roxane likes him, he lets his guard down, unaware that Tony and Roxane are ready to double cross him.”

Actors Nathan and Joe are excited to get to work on their mafioso alter egos in “The Lonely Godfather.” Nathan, or Clark to friends, is already getting into character channeling his inner Marlon Brando (he does a very convincing impression) and Joe is drawing character inspiration from his favorite mob film, Goodfellas. When asked what his favorite part of putting together a show is, Nathan remarks, “Trying to see how the characters develop. It’s a lot of work, trying to get the characters the way you want them to be and a lot of trial and error.” Joe, on the other hand, is a theater newbie and he is looking forward to having a lot of fun and meeting new people throughout this production.

You definitely will not want to miss the four shows in Unique Theatre’s “A Slice of Life” which is coming to the Compass Performing Arts Center from December 2nd to December 11th. There will be something for everyone and these actors are eager to show off their skills and once again perform for live audiences. More details for the show can be found on the Unique Theatre website and Facebook page.